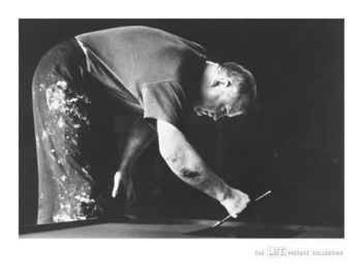 Adolph Frederick "Ad" Reinhardt (December 24, 1913 – August 30, 1967) was an abstract painter active in New York beginning in the 1930s and continuing through the 1960s. He was a member of the American Abstract Artists and was a part of the movement centered on the Betty Parsons Gallery that became known as abstract expressionism. He was also a member of The Club, the meeting place for the New York School abstract expressionist artists during the 1940s and 1950s. He wrote and lectured extensively on art and was a major influence on conceptual art, minimal art and monochrome painting. Most famous for his "black" or "ultimate" paintings, he claimed to be painting the "last paintings" that anyone can paint. He believed in a philosophy of art he called Art-as-Art and used his writing and satirical cartoons to advocate for abstract art and against what he described as "the disreputable practices of artists-as-artists".

Tags:
art
Permalink for this quote

Art is too serious to be taken seriously.