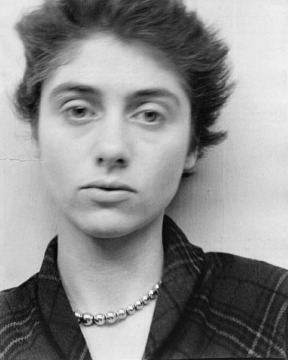 Diane Arbus (; March 14, 1923 – July 26, 1971) was an American photographer. Arbus worked to normalize marginalized groups and highlight the importance of proper representation of all people. She worked with a wide range of subjects including members of the LGBTQ+ community, strippers, carnival performers, nudists, dwarves, children, mothers, couples, elderly people, and middle-class families. She photographed her subjects in familiar settings: their homes, on the street, in the workplace, in the park. “She is noted for expanding notions of acceptable subject matter and violates canons of the appropriate distance between photographer and subject. By befriending, not objectifying her subjects, she was able to capture in her work a rare psychological intensity.” In his 2003 New York Times Magazine article, "Arbus Reconsidered," Arthur Lubow states, "She was fascinated by people who were visibly creating their own identities—cross-dressers, nudists, sideshow performers, tattooed men, the nouveaux riches, the movie-star fans—and by those who were trapped in a uniform that no longer provided any security or comfort." Michael Kimmelman writes in his review of the exhibition Diane Arbus Revelations, that her work "transformed the art of photography (Arbus is everywhere, for better and worse, in the work of artists today who make photographs)".In her lifetime she achieved some recognition and renown with the publication, beginning in 1960, of photographs in such magazines as Esquire, Harper’s Bazaar, London's Sunday Times Magazine, and Artforum. In 1963 the Guggenheim Foundation awarded Arbus a fellowship for her proposal entitled, "American Rites, Manners and Customs". She was awarded a renewal of her fellowship in 1966. John Szarkowski, the director of photography at the Museum of Modern Art (MoMA) in New York City from 1962 to 1991, championed her work and included it in his 1967 exhibit New Documents along with the work of Lee Friedlander and Garry Winogrand. Her photographs were also included in a number of other major group shows.In 1972, a year after her suicide, Arbus became the first photographer to be included in the Venice Biennale where her photographs were "the overwhelming sensation of the American Pavilion" and "extremely powerful and very strange."The first major retrospective of Arbus' work was held in 1972 at MoMA, organized by Szarkowski. The retrospective garnered the highest attendance of any exhibition in MoMA's history to date. Millions viewed traveling exhibitions of her work from 1972 to 1979. The book accompanying the exhibition, Diane Arbus: An Aperture Monograph, edited by Doon Arbus and Marvin Israel and first published in 1972 has never been out of print.

Love involves a peculiar, unfathomable combination of understanding and misunderstanding.

A photograph is a secret about a secret. The more it tells you the less you know.

I really believe there are things nobody would see if I didn't photograph them.