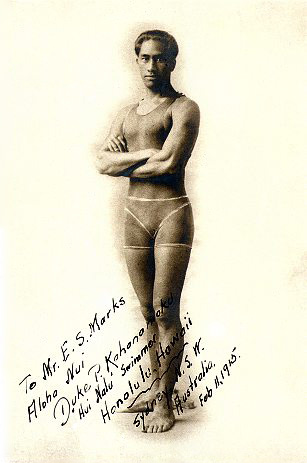 Duke Paoa Kahinu Mokoe Hulikohola Kahanamoku (August 24, 1890 – January 22, 1968) was a Native Hawaiian competition swimmer who popularized the ancient Hawaiian sport of surfing. He was born towards the end of the Kingdom of Hawaii, just before the overthrow, living into statehood as a United States citizen. He was a five-time Olympic medalist in swimming. Duke was also a Scottish Rite Freemason, a law enforcement officer, an actor, a beach volleyball player and a businessman.

I have never seen snow and do not know what winter means.