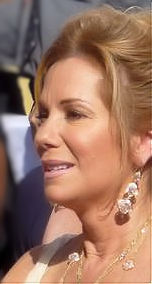 Kathryn Lee Gifford (née Epstein; born August 16, 1953) is an American television presenter, singer, songwriter, occasional actress and author. She is best known for her 15-year run (1985–2000) on the talk show Live! with Regis and Kathie Lee, which she co-hosted with Regis Philbin. She is also known for her 11-year run with Hoda Kotb, on the fourth hour of NBC's Today show (2008–2019). She has received 11 Daytime Emmy nominations and won her first Daytime Emmy in 2010 as part of the Today team. Gifford's first television role had been as Tom Kennedy's singer/sidekick on the syndicated version of Name That Tune only in the 1977-1978 season. She also occasionally appeared on the first three hours of Today and was a contributing NBC News correspondent.

Love in the real world means saying you're sorry 10 times a day.