No writing has any real value which is not the expression of genuine thought and feeling. 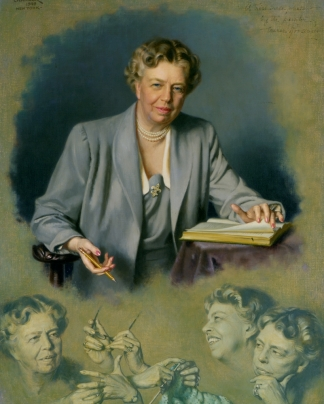 Anna Eleanor Roosevelt (; October 11, 1884 – November 7, 1962) was an American political figure, diplomat and activist. She served as the First Lady of the United States from March 4, 1933, to April 12, 1945, during her husband President Franklin D. Roosevelt's four terms in office, making her the longest-serving First Lady of the United States. Roosevelt served as United States Delegate to the United Nations General Assembly from 1945 to 1952. President Harry S. Truman later called her the "First Lady of the World" in tribute to her human rights achievements.Roosevelt was a member of the prominent American Roosevelt and Livingston families and a niece of President Theodore Roosevelt. She had an unhappy childhood, having suffered the deaths of both parents and one of her brothers at a young age. At 15, she attended Allenswood boarding Academy in London and was deeply influenced by its headmistress Marie Souvestre. Returning to the U.S., she married her fifth cousin once removed, Franklin Delano Roosevelt, in 1905. The Roosevelts' marriage was complicated from the beginning by Franklin's controlling mother, Sara, and after Eleanor discovered her husband's affair with Lucy Mercer in 1918, she resolved to seek fulfillment in leading a public life of her own. She persuaded Franklin to stay in politics after he was stricken with a paralytic illness in 1921, which cost him the normal use of his legs, and began giving speeches and appearing at campaign events in his place. Following Franklin's election as Governor of New York in 1928, and throughout the remainder of Franklin's public career in government, Roosevelt regularly made public appearances on his behalf; and as First Lady, while her husband served as president, she significantly reshaped and redefined the role of First Lady.

You may find more from Eleanor Roosevelt on Wikiquote

It takes courage to love, but pain through love is the purifying fire which those who love generously know. We all know people who are so much afraid of pain that they shut themselves up like clams in a shell and, giving out nothing, receive nothing and therefore shrink until life is a mere living death.

Happiness is not a goal, it is a by-product. Paradoxically, the one sure way not to be happy is deliberately to map out a way of life in which one would please oneself completely and exclusively.

Tags:
life reality self learn
Permalink for this quote

A woman is like a tea bag â you can't tell how strong she is until you put her in hot water.

I think that somehow, we learn who we really are and then live with that decision.

When will our consciences grow so tender that we will act to prevent human misery rather than avenge it?

A person's a person, no matter how small.

Simplicity and repose are the qualities that measure the true value of any work of art.

Having this, and losing it, made it even sweeter the second time around.

One day Joseph Lister was summoned to assist a wealthy lord with a fishbone that had lodged at the back of his throat. After Lister had skillfully removed the obstruction, the grateful patient asked him what he was owed. "My lord," Lister suggested, "suppose we settle for half of what you would be willing to give me if the bone were still lodged in your throat.

They deem me mad because I will not sell my days for gold; and I deem them mad because they think my days have a price.