Sound is the vocabulary of nature. 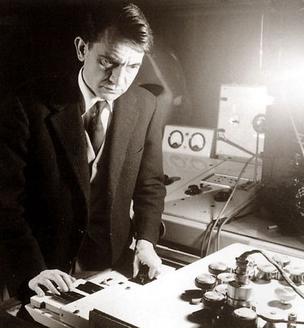 Pierre Henri Marie Schaeffer (English pronunciation: (listen), French pronunciation: â[ÊÉfÉÊ]; 14 August 1910 – 19 August 1995) was a French composer, writer, broadcaster, engineer, musicologist and acoustician. His innovative work in both the sciences—particularly communications and acoustics—and the various arts of music, literature and radio presentation after the end of World War II, as well as his anti-nuclear activism and cultural criticism garnered him widespread recognition in his lifetime.

You may find more from Pierre Schaeffer on Wikiquote

I turn off the radio, listen to the quiet. Which has its own rich sound. Which I knew, but had forgotten. And it is good to remember.

The ear is the avenue to the heart.

Avoid safety. The very word has a mean sound.

I woke up in the middle of the night and climbed out of the tent to make coffee. There was no sound save the wind and, in all that space, not one light, just a scant new moon that hung in the sky like a fine silk thread. The twentieth century had vanished. I raised my cup in a toast.

The Qabalists believed that the universe was created from sound. Thus by reciting sacred sounds, changes or transformations of matter could take place. Healing could simply consist of reinvoking those sacred sounds in the body. . . . Perhaps this is what the shamans do when they chant.