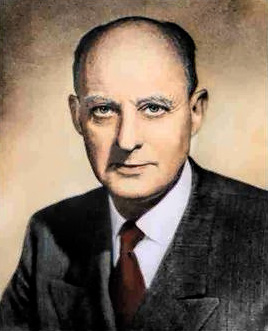 Karl Paul Reinhold Niebuhr (1892–1971) was an American Reformed theologian, ethicist, commentator on politics and public affairs, and professor at Union Theological Seminary for more than 30 years. Niebuhr was one of America's leading public intellectuals for several decades of the 20th century and received the Presidential Medal of Freedom in 1964. A public theologian, he wrote and spoke frequently about the intersection of religion, politics, and public policy, with his most influential books including Moral Man and Immoral Society and The Nature and Destiny of Man. The latter is ranked number 18 of the top 100 non-fiction books of the twentieth century by Modern Library. Andrew Bacevich labelled Niebuhr's book The Irony of American History "the most important book ever written on U.S. foreign policy." The historian Arthur Schlesinger Jr. described Niebuhr as "the most influential American theologian of the 20th century" and Time posthumously called Niebuhr "the greatest Protestant theologian in America since Jonathan Edwards."Starting as a minister with working-class sympathies in the 1920s and sharing with many other ministers a commitment to pacifism and socialism, his thinking evolved during the 1930s to neo-orthodox realist theology as he developed the philosophical perspective known as Christian realism. He attacked utopianism as ineffectual for dealing with reality, writing in The Children of Light and the Children of Darkness (1944), "Man's capacity for justice makes democracy possible; but man's inclination to injustice makes democracy necessary." Niebuhr's realism deepened after 1945 and led him to support American efforts to confront Soviet communism around the world. A powerful speaker, he was one of the most influential thinkers of the 1940s and 1950s in public affairs. Niebuhr battled with religious liberals over what he called their naïve views of the contradictions of human nature and the optimism of the Social Gospel, and battled with religious conservatives over what he viewed as their naïve view of scripture and their narrow definition of "true religion". During this time he was viewed by many as the intellectual rival of John Dewey.Niebuhr's contributions to political philosophy include utilizing the resources of theology to argue for political realism. His work has also significantly influenced international relations theory, leading many scholars to move away from idealism and embrace realism. A large number of scholars, including political scientists, political historians, and theologians, have noted his influence on their thinking. Aside from academics, activists such as Myles Horton and Martin Luther King Jr. and numerous politicians have also cited his influence on their thought, including Hillary Clinton, Hubert Humphrey, Dean Acheson, James Comey, Madeleine Albright, and John McCain, as well as presidents Barack Obama and Jimmy Carter. Recent years have seen a renewed interest in Niebuhr's work, in part because of Obama's admiration. In 2017, PBS released a documentary on Niebuhr, titled An American Conscience: The Reinhold Niebuhr Story.

Forgiveness is the final form of love.

If we choose only to expose ourselves to opinions and viewpoints that are in line to our own, we become more polarized, more set in our own ways. It will only reinforce and deepen the political divides in our country. But if we choose to actively seek out information that challenges our assumptions and beliefs, perhaps we can begin to understand where the people who disagree with us are coming from.