Many of us have no long-range vision in much of our struggle. We think only of the moment, this time, this place, this circumstance. But think of the ten generations of children that inherit love, and their children, and theirs. â¦ Anyone can count the seeds of an apple. Who can count the apples in a seed? 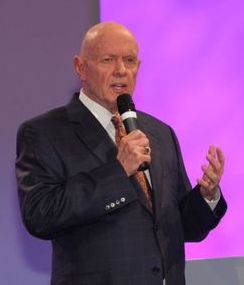 Stephen Richards Covey (October 24, 1932 – July 16, 2012) was an American educator, author, businessman, and keynote speaker. His most popular book is The 7 Habits of Highly Effective People. His other books include First Things First, Principle-Centered Leadership, The 7 Habits of Highly Effective Families, The 8th Habit, and The Leader In Me — How Schools and Parents Around the World Are Inspiring Greatness, One Child at a Time. In 1996, Time magazine named him one of the 25 most influential people. He was a professor at the Jon M. Huntsman School of Business at Utah State University at the time of his death.

You may find more from Stephen Covey on Wikiquote

The middle of the road is where the white line is-and that's the worst place to drive.

I'd finally found a placeâand maybe even some peopleâworth holding on to.

—Sarah Dessen in What Happened to Goodbye

Nature is an infinite sphere of which the center is everywhere and the circumference nowhere.