I believe that animals have been talking to human beings ever since we were all made and put into this world. 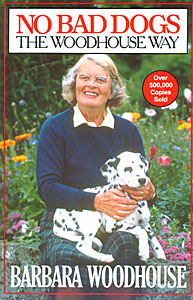 Barbara Kathleen Vera Woodhouse (née Blackburn; 9 May 1910 Rathfarnham, Ireland – 9 July 1988, Buckinghamshire, England) was a dog trainer, author, horse trainer and television personality. Her 1980 television series Training Dogs the Woodhouse Way made her a household name in the UK. Among her catch-phrases were "walkies" and "sit!", the latter parodied in the 1983 James Bond film Octopussy. She was also known for her "no bad dogs" philosophy.

You may find more from Barbara Woodhouse on Wikiquote

Dying? Not the end of everything. We think it is. But what happens on earth is only the beginning.

—Mitch Albom in The Five People You Meet in Heaven

The Earth is the cradle of humanity, but mankind cannot stay in the cradle forever.

This is the most joyful day that ever I saw in my pilgrimage on earth.

You're on earth. There's no cure for that.

Tags:
earth
Permalink for this quote