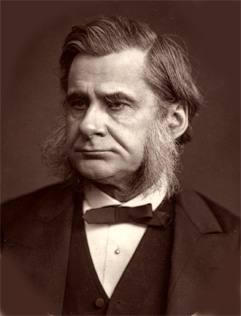 Thomas Henry Huxley (4 May 1825 â 29 June 1895) was an English biologist and anthropologist specialising in comparative anatomy. He has become known as "Darwin's Bulldog" for his advocacy of Charles Darwin's theory of evolution.The stories regarding Huxley's famous 1860 Oxford evolution debate with Samuel Wilberforce were a key moment in the wider acceptance of evolution and in his own career, although some historians think that the surviving story of the debate is a later fabrication. Huxley had been planning to leave Oxford on the previous day, but, after an encounter with Robert Chambers, the author of Vestiges, he changed his mind and decided to join the debate. Wilberforce was coached by Richard Owen, against whom Huxley also debated about whether humans were closely related to apes.

Perhaps the most valuable result of all education is the ability to make yourself do the thing you have to do, when it ought to be done, whether you like it or not.

Tags:
education will desire
Permalink for this quote