Nobody talks so constantly about God as those who insist that there is no God. 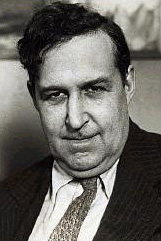 Heywood Campbell Broun Jr. (; December 7, 1888 – December 18, 1939) was an American journalist. He worked as a sportswriter, newspaper columnist, and editor in New York City. He founded the American Newspaper Guild, later known as The Newspaper Guild and now as The NewsGuild-CWA. Born in Brooklyn, New York, he is best remembered for his writing on social issues and his championing of the underdog. He believed that journalists could help right wrongs, especially social ills.

You may find more from Heywood Broun on Wikiquote

Sports do not build character. They reveal it.

Tags:
sports
Permalink for this quote

Posterity is as likely to be wrong as anyone else.

A couple of months ago I had a dream, which I remember with the utmost clarity. (I don't usually remember my dreams.) I dreamed I had died and gone to Heaven. I looked about and knew where I was â green fields, fleecy clouds, perfumed air, and the distant, ravishing sound of the heavenly choir. And there was the recording angel smiling broadly at me in greeting. I said in wonder, "Is this Heaven?" The recording angel said, "It is." I said (and on waking and remembering, I was proud of my integrity), "But there must be a mistake. I don't belong here. I'm an atheist." "No mistake," said the recording angel. "But as an atheist how can I qualify?" The recording angel said sternly, "We decide who qualifies. Not you." "I see," I said. I looked about, pondered for a moment, then turned to the recording angel and asked, "Is there a typewriter here that I can use?" The significance of the dream was clear to me. I felt Heaven to be the act of writing, and I have been in Heaven for over half a century, and I have always known this.

I don't know if God exists, but it would be better for His reputation if He didn't.

I recently invented a new theory: ambitheism. This is the doctrine that God both does and doesn't exist. I have noticed that when I try to believe in God, I am filled with sudden moments of despair that God is absent, but when I try to be an atheist, I slowly come to believe in a divine will. Thus, I have concluded that both ideas are true. God simultaneously is and isn't.

I'm what you call a teleological existential atheist. I believe there's an intelligence to the universe with the exception of certain parts of New Jersey.

An atheist has to know a lot more than I know. An atheist is someone who knows there is no god. By some definitions atheism is very stupid.