Carl Sagan was an American astrophysicist. He is best known as a science-popularizer who showed the world the wonders of the scale and complexity of the universe. 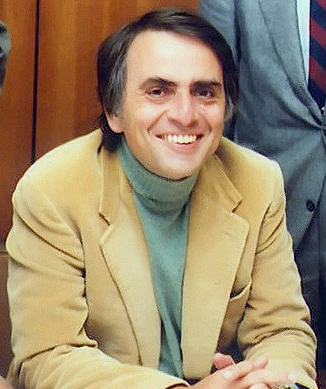 Carl Edward Sagan (; SAY-gÉn; November 9, 1934 â December 20, 1996) was an American astronomer, planetary scientist, cosmologist, astrophysicist, astrobiologist, author, and science communicator. His best known scientific contribution is his research on the possibility of extraterrestrial life, including experimental demonstration of the production of amino acids from basic chemicals by radiation. Sagan assembled the first physical messages sent into space, the Pioneer plaque and the Voyager Golden Record, universal messages that could potentially be understood by any extraterrestrial intelligence that might find them. Sagan argued in favor of the hypothesis, accepted since, that the high surface temperatures of Venus are the result of the greenhouse effect.Initially an assistant professor at Harvard, Sagan later moved to Cornell, where he spent most of his career. He published more than 600 scientific papers and articles and was author, co-author or editor of more than 20 books. He wrote many popular science books, such as The Dragons of Eden, Broca's Brain, and Pale Blue Dot. He also co-wrote and narrated the award-winning 1980 television series Cosmos: A Personal Voyage, which became the most widely watched series in the history of American public television: Cosmos has been seen by at least 500 million people in 60 countries. A book, also called Cosmos, was published to accompany the series. Sagan also wrote a science-fiction novel, published in 1985, called Contact, which became the basis for a 1997 film of the same name. His papers, comprising 595,000 items, are archived at the Library of Congress.Sagan was a popular public advocate of skeptical scientific inquiry and the scientific method; he pioneered the field of exobiology and promoted the search for extra-terrestrial intelligent life (SETI). He spent most of his career as a professor of astronomy at Cornell University, where he directed the Laboratory for Planetary Studies. Sagan and his works received numerous awards and honors, including the NASA Distinguished Public Service Medal, the National Academy of Sciences Public Welfare Medal, the Pulitzer Prize for General Non-Fiction (for his book The Dragons of Eden), and (for Cosmos: A Personal Voyage), two Emmy Awards, the Peabody Award, and the Hugo Award. He married three times and had five children. After developing myelodysplasia, Sagan died of pneumonia at the age of 62 on December 20, 1996.

Consider again that dot. That's here. That's home. That's us. On it everyone you love, everyone you know, everyone you ever heard of, every human being who ever was, lived out their lives. The aggregate of our joy and suffering, thousands of confident religions, ideologies, and economic doctrines, every hunter and forager, every hero and coward, every creator and destroyer of civilization, every king and peasant, every young couple in love, every mother and father, hopeful child, inventor and explorer, every teacher of morals, every corrupt politician, every "superstar", every "supreme leader", every saint and sinner in the history of our species lived there - on a mote of dust suspended in a sunbeam.

The Earth is a very small stage in a vast cosmic arena. Think of the rivers of blood spilled by all those generals and emperors so that, in glory and triumph, they could become the momentary masters of a fraction of a dot. Think of the endless cruelties visited by the inhabitants of one corner of this pixel on the scarcely distinguishable inhabitants of some other corner, how frequent their misunderstandings, how eager they are to kill one another, how fervent their hatreds.

Our posturings, our imagined self-importance, the delusion that we have some privileged position in the Universe, are challenged by this point of pale light. Our planet is a lonely speck in the great enveloping cosmic dark. In our obscurity, in all this vastness, there is no hint that help will come from elsewhere to save us from ourselves.

The Earth is the only world known so far to harbor life. There is nowhere else, at least in the near future, to which our species could migrate. Visit, yes. Settle, not yet. Like it or not, for the moment the Earth is where we make our stand.

It has been said that astronomy is a humbling and character-building experience. There is perhaps no better demonstration of the folly of human conceits than this distant image of our tiny world. To me, it underscores our responsibility to deal more kindly with one another, and to preserve and cherish the pale blue dot, the only home we've ever known.

Somewhere, something incredible is waiting to be known.

I maintain there is much more wonder in science than in pseudoscience. And in addition, to whatever measure this term has any meaning, science has the additional virtue, and it is not an inconsiderable one, of being true.

Imagine, a room, awash in gasoline. And there are two implacable enemies in that room. One of them has 9,000 matches. The other has 7,000 matches. Each of them is concerned about whoâs ahead, whoâs stronger. Well, that's the kind of situation we are actually in. The amount of weapons that are available to the United States and the Soviet Union are so bloated, so grossly in excess of what's needed to dissuade the other that if it weren't so tragic, it would be laughable.

An atheist has to know a lot more than I know. An atheist is someone who knows there is no god. By some definitions atheism is very stupid.

Imagination will often carry us to worlds that never were. But without it we go nowhere.

We are like butterflies who flutter for a day and think it's forever.

Tags:
wonder
Permalink for this quote

The fossil record implies trial and error, an inability to anticipate the future, features inconsistent with an efficient Great Designer.

With insufficient data it is easy to go wrong.

Human beings have a demonstrated talent for self-deception when their emotions are stirred.

If you wish to make an apple pie from scratch, you must first invent the universe.

Matter is composed chiefly of nothing.

The universe seems neither benign nor hostile, merely indifferent to the concerns of such puny creatures as we are.

Carl Sagan has the following books quoted on Quodid: