And what, for instance, would have happened had Romeo and Juliet lived to middle age, their silhouettes broadened by pasta? 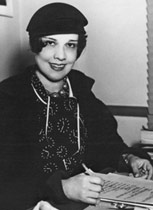 Corinne Anita Loos (April 26, 1889 – August 18, 1981) was an American screenwriter, playwright and author. In 1912, she became the first-ever female staff scriptwriter in Hollywood, when D.W. Griffith put her on the payroll at Triangle Film Corporation. She is best known for her 1925 comic novel, Gentlemen Prefer Blondes, as well as her 1951 Broadway adaptation of Colette’s novella Gigi.

You may find more from Anita Loos on Wikiquote

Loneliness is like starvation: you don't realize how hungry you are until you begin to eat.

Age is something that doesn't matter, unless you are a cheese.

I come from a family where gravy is considered a beverage.

If you're condemned to death they have to give you one last meal of your choice. What is that all about? A group of people plans to kill you, so they want you to eat something you like? Do they think the food part will take your mind off the dying part? Or do they prefer to kill you when you're just coming off a peak experience and full of positive energy?